T- By March 18th, Wednesday of the Post-Production week

R- As a part of the game production team

M- To create an enjoyable game aesthetic with a detailed/fitting character style (for cartoon sci-fi genre) in mind, much like Hideo Kojima’s design philosophy (refer to Leaders in the Field below). I’ll also create a simple walking animation.

S- For the 1st session of the 3 sessions set for the Game Design Competition.

Leader(s) in the Field / Exemplary Work(s)

“He’s representing a human being good and bad, both sides of the coin. This is a solid human being. Sometimes you believe you do something good and it turns out not out be so good.(2:12~2:20)”
This explains how adding human characteristics into a character makes it come alive and interesting to the player. People in the world can’t be conclusively decided whether if they’re simply ‘good’ or ‘bad’ – we’re mix of both. Giving characters human traits such as goals, desires, flaws, ideals, and even their own life philosophy can make them much more intriguing.

00:00 Determines the animation to be played. Controlled by script parameters.

00:52 [Parameter] button on the bottom lefthand corner of the Animator Window

02:09 Empty state – doesn’t do anything. They don’t mask other animation being played on other layers.

03:02 first state will be the default state, colored orange

04:44 Transition- between states, right-click on a state, select Make Transition. This will give you a transition arrow, attached to the cursor. Click on another state to complete this.

05:10 Solo and Mute. Mute disables the transition, Solo mutes all the states not marked as a solo.

05:41 Atomic property- the transition is not interruptible.

05:53 Graph- shows how the animation is handled during transition

0:36 start rigging. create a model before doing so, though.

armature – object that contains all your bones.

In Front– allows you to see your bones, start with the Hip Bone/Controller

5:50 Every bone needs to be parented to another bone

The (FILM, SOUND, or GAME Creation)

KGB: Big and scary. Significantly larger than the player character. Constant speed of 4.

Player Character can jump over gaps made from the map generation and die when it falls into the gap.

KGB cannot jump, but will not fall into the gap from the floor generation either. He won’t die, creating an endless game mode.

Floor kills the Player Character if the user makes mistakes and falls down the gap. It will not kill the KGB.

As a cultural system, the <KGB Game> is clearly an open system. the game’s idea is derived from the Russian culture and history as well as parts of the meme culture poking ironically at the idea of communism, translating it into a 2D Platformer.

With a whole new team, I created a game with my personal portfolio and this session’s five requirements in mind.

My experience in this role is designing a fitting player character artwork and moving animation for the game’s theme and personality.

S – Learn how to make a creative and logical character design for the team this will require input and feedback from my team members since the product will be a collective result of our skills.

M – I will know that I made progress with feedback from the teammates during the production time as well as the judges involved in the process.

A – I’m familiar with tools such as Photoshop, and have years of experience with designing my own characters as a hobby (Dungeons and Dragons, original characters of other people, and online concept prompts).

R – This goal will help me further myself with this field and get to know in-depth about a field I’m interested in.

T – The deadline for this goal is February 21th, when Session 5 ends.

Leader(s) in the Field / Exemplary Work(s)

“[Hideo Kojima’s design] philosophy, fundamentally it is about making the impossible possible. By discarding our preconceived notions of design and attempting to scale a “so-called barrier of impossibility”, this barrier represents any design goal you may have and the way to overcome.” (1:49)
This explains how the commonly-used design components can be detrimental for creating a character that fits within the game’s universe. This can leave the player feel like the character is uninteresting, dull, and even generic. Deliberately challenging himself, Hideo Kojima can create memorable characters.

To export game-ready animations from Photoshop to Unity, you press “image” (in the top left corner, then press image size, then an options box opens up and you multiply the pixel width with your number of frames.

Then make a new Photoshop file then type in the right dimensions for your sprite sheet (that would be the number you got in the first step) into the width box.

A white rectangle should show up but this doesn’t give any indication to where you’re supposed to put the sprites. go up to “view” then press “show” after that press “grid”, which will make the placing of your images easier and more accurate.

Head back over to your file with your animation, use the lasso tool on your first frame and then copy it and then paste it on the grid. then repeat this step until all of your frames are in place.

To save the sprite sheet, press save as and save it to your desktop or Google Drive.

1:39 Interface, going through where all the options are

8:05 shift to move it one direction

0:20 How to make Clipping Layer 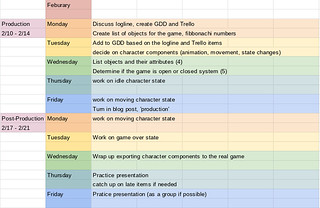 Link to the Google Sheets

This is my general plan for Session 5. This is not set in stone, the schedule can fluctuate to fit the situation. The items are priority listed and thus will not change in order.

I made the character sprites and animation using Piskelapp and Unity animation function so it would communicate to the player about the game states. They can be seen in the left-center area of the screen.

I also made some of the buttons on the credits scene. While my creation is not seen in the video, an example of the button used can be seen when the player clicks on [PLAY] to be transported to the game scene.

“I like the way the characters are shadows” – Charles B.

The game is about running on an infinitely generating platform while dodging the gaps. The mechanics were simple, requiring a spacebar press to jump. The game is unexpected, the concept behind our game is unique. Our game was credible because it derives from the historically researched USSR. The game did intentionally leave out a question for the audience, ‘why is the man running from the KGB?’ Since we can ask this,  the game does have a story, even though it’s currently unexplored in this iteration.

I learned how to make animations on Unity, how to make scene transfers and button functions using scene numbers. I was able to solve credits buttons not being implemented properly on all scenes (it was repetitive and the UI Coder was busy) by looking up a guide and educating teammates that had spare time.

Charles B.: Production and Post-Production section