Build smart goals by going the opposite way (TRAMS).

R: as part of my NMSC School of Rock program, I will explore lyric writing

A: by following tutorials by Holistic Songwriting and books provided by Mr. LeDuc,

M: I will create lyrics from my own experience that people around my age can relate with (measurable through asking for feedback from my classmates and friends)

S: For the third week of the School of Rock class.

I asked PJ for feedback on my song idea. He said it’s relatable and definitely has a lot of emotion behind the idea. I think it’s a topic that doesn’t often get written about but deserves as much attention as other topics.

I’m somewhat embarrassed by my work, but it is what it is, especially since it’s my first time songwriting and  I’ve also never been good with descriptive words. 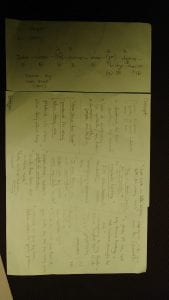 My friend, an aspiring writer, made a poem about his own experience with pushing content on the interwebs. I asked if it was okay if I turn it into a lyric for a song, and he accepted my offer. I wasn’t able to make progress on the original lyrics, since I forgot it at my house.

I decided to make progress with the collaboration work(I’m collaborating with Jared) rather than working solo. I’ll need more experience with writing to come up with creative words, which is not enough time for me to explore them in this class. I worked on organizing the lyrics I transcribed from the poem. below are the lyrics I’ve rearranged so far.

is it rude to seek a bravo?

easy to see which fills others with glee

a flip of a screen

seeing that which you wanted to be

off to see who next shall entertain

wish not to remain, which that is plain

flick of a finger

they no longer linger

easy to see which fills others with glee

a flip of a screen

seeing that which you wanted to be

flick of a finger

they no longer linger

finding a place to truly remain

finding a place to truly remain

yesterday, I wrote lyrics during my free time (this is separate from everything else I’ve been working on). Today I reflected on what I’ve written and edited some areas.

I also don’t think I’ll be hitting my goal by the time I’ve set it, but I’ve also discovered a new method for me to redirect my creativity towards, which I think is better for me overall.

Dealt a bad hand from the start
Messy and disjointed, like abstract art
You whisper, “Treat me like a princess”
Should’ve paid attention to your price tag
Push down, shatter any hint of consciousness
Nineteen-year-old hag, what color is your flag?
Queen of thorns and daggers, you’ve got amazing aim
Do you not even feel any sense of shame?
Sixth to be dragged down the same pit
Don’t mind pushing people off for your own gain
Ego too high to admit
Sympathy, charity, [popularity,] don’t mind other’s pain
(new) Desecrate my name
life isn’t a video game
it has a consequence
You flourish in the victim’s role
What a fucking ugly mole
I am glad you’re here
Life doesn’t have to be grandeur

a quiet walk on a late Friday morning
I know what today will bring
a moment of introspection,
being touchable is a wonderful sensation
this estuary, a sanctuary,
a place where fairies glide their wings
a place frozen in the past, a place where miles span with no others
yet full of mystique and wonders

Holistic Songwriting: Do THIS with every song you write…

This video hands out a rule of thumb for setting intro/verse/chorus(and more) patterns, and gives handy verse numbers for each of them as well.

Find rhymes, synonyms, adjectives, and more! Although the syntaxes format can get confusing, RhymeZone provides words I could mix and match with the initial rhyme I created.

“it was cool that you had your whole process presented, a lot of people don’t tend to do that.” – Daniel

“I like the simplistic approach to your presentation if I had to critique it would be how you were a bit quiet.” – Sofi

“I liked the lyrics you wrote, and also how you gave credit where it was due.” – Lexi

I like the lyrics I have so far, I may take them somewhere.

I channeled my perceptions about the world and made lyrics off of it.

I initially collaborated, although I didn’t find it useful for music creation. I still demonstrated that I’m capable of collaborating with others, though.

I used YouTube videos to guide myself through the lyric-writing process.

I used a human proofreader(as well as AI proofreader), so I don’t make grammar mistakes.